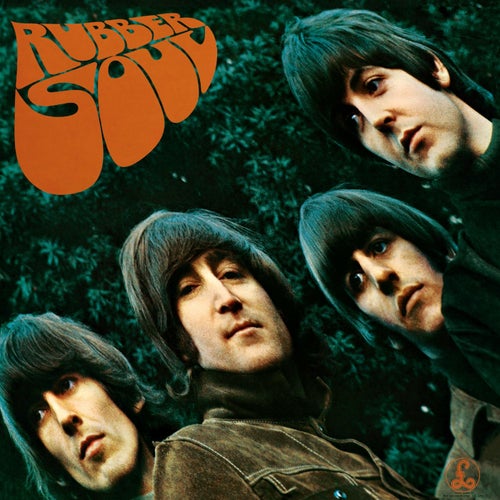 Play on Napster
Released: Dec 1965
Label: Emi Catalogue
The Beatles released their sixth album at the end of 1965 -- a golden year for British and American music. Distilling the influence of Bob Dylan’s records and Atlantic, Motown and Stax soul singles, Rubber Soul was a startlingly original album that left their contemporaries trailing in the dust.

Entering the studio with a mission of recording an album of original material, they wrote a host of melodic songs that provide fascinating examples of the group’s aspiration to create meaningful songs that were lyrically and sonically ambitious. The reflective lyric of “In My Life” conveys sadness and hope, while “I’m Looking Through You,” “You Won’t See Me” and “Girl” reveal a darker atmosphere than earlier relationship songs. Musically, the heartbeat of the album is the combination of Ringo’s inventive drumming and Paul’s melodic bass playing, evident on the rhythmic pulse of “Drive My Car.” The blend of intricate harmonies sung by John, Paul and George on tracks such as “Nowhere Man,” “Michelle” and “The Word” give Rubber Soul one of its most distinctive qualities.

Surrounded by the madness that came with their fame, the studio was a refuge where they could let their imaginations run free. A month of recording sessions were scheduled at Abbey Road, giving the group time to experiment with new recording techniques and instrumentation, such as the sitar on “Norwegian Wood (This Bird Has Flown).” “The sitar on it blew my mind!,” Brian Wilson of The Beach Boys said. “I was so impressed with that album and that sound.” He responded by working tirelessly on the songs and arrangements for his group’s next album, Pet Sounds. A monumental album, Rubber Soul inspired subsequent generations of musicians. “It was the one [album] that everyone in Seattle listened to,” Dave Grohl said. “I think it‘s why I got hired to be the drummer in Nirvana, because I said the word ‘Beatles’!” Rubber Soul is the pivotal album The Beatles' career. Where once there had been songs of innocence, now there were songs of experience.
Kevin Howlett